This week's assignment turned out to be very tricksy and somewhat inscrutable. Like, there is supposed to be something inside an artichoke when you cut off all the green outer leaves, right? It's not just nature's little joke, getting us to pay for these odd-looking vegetables (most of which are tipped right into the trash) only to find....nothing?

I think I'm confused about artichokes.

This week was the one I've been waiting for - the week in which we were to make homemade mayonnaise, a task I set myself to do this summer. And I can now say that I've done it! So have Meelyn and Aisling, because if there was ever a three-person task, it's mayonnaise making: One person to stir, one to pour the oil, and the third to lie back in a kitchen chair, panting and nursing a rubbery, tired arm, waiting to spell Person #1 with the stirring. We made mayonnaise from two different recipes this week. Eh bien soit, one we liked and one we didn't.

I'm sorry to say that the one we didn't like was from Le Cordon Bleu at Home. The recipe, along with the recipe for Salade Messidor, can be found on pages 30-31 of the book.

Le Cordon Bleu at Home calls for the following ingredients in their mayonnaise:

The girls and I undertook this recipe on Sunday, since I wanted a little practice before putting the salade together. The technique for making mayonnaise is completely straightforward and doesn't vary from recipe to recipe: beat the egg yolks quickly, add the oil slowly. But that's really the second part of the technique. The first part of the mayonnaise-making technique is to make sure you have all your ingredients at room temperature. That's not so difficult for the oil, which I'm assuming most of us store in a kitchen cupboard, no matter what sort you're using. But the eggs, now, that's a different story. To bring your eggs to room temperature quickly if you've forgotten to get them out of the fridge ahead of time like, say, me, you can put them in a small, deep bowl with warm water to cover them. Fifteen minutes or so should do it. I learned this handy trick from The Tante Marie's Cooking School Cookbook by Mary Risley, which is another book I feel I simply must own. (Kayte already talked me into buying Baking: From My Home to Yours by Dorie Greenspan, the book she and the group from Tuesdays with Dorie blog are baking their way through, and why I did this I simply cannot fathom, as I dislike baking to a degree almost phobic in its intensity.)

The reason it's important to have all ingredients at room temperature is because mayonnaise is an emulsion of egg yolks and oil -- you need to get all the little molecules that make up these two substances to bond -- emulsify -- and they can't do it if they're at disparate temperatures. Alors, any attempt to combine cold egg yolks with room temp oil is only going to end with you sitting hunched over on a bar stool, throwing back glasses of marc with a cigarette hanging unattractively out of the side of your mouth, muttering cuss words in French.

Meelyn, Aisling and I had great success with this mayonnaise. It obediently did just what it was supposed to do. The only problem was that it was bland. We added more salt. We added more pepper. We gave it another kick of vinegar. The one thing I didn't want to do was add more Dijon mustard, because it already had a faint mustard flavor and I wanted our mayonnaise to taste like mayonnaise. It didn't seem too much to ask. Frrustrated, I went to the shelf and got out Mastering the Art of French Cooking, Volume I, Julia Child's chef d'oeuvre, to see what her take on the recipe was. I can remember my grandmother's homemade mayonnaise, and it tasted creamy and rich and wonderful, whether it went into a Hoosier potato salad or on a turkey sandwich. It didn't taste like mustard.

Julia's instructions for basic mayonnaise (she lists seven variations) can be found on page 87. Here's the list of ingredients:


I found the two recipes intruguing, because they're so fundamentally similar, yet different in ways that matter a lot. To our taste, anyway. Probably the biggest difference was the use of plain salad mustard in a small amount in place of the much larger amount of Dijon mustard. As it turned out, that was what made all the difference. Julia Child's mayonnaise beat Le Cordon Bleu's hands down, baby.

The Salade Messidor was easy to put together, except for the artichokes. We used two chokes instead of the extravagant six called for in the recipe. Le Cordon Bleu at Home has a very nice section at the back of the book that gives photographic depictions of how to do things like, well, peel an artichoke. So the girls and I peeled.

When we got beneath the outer leaves, we discovered to our dismay that our artichokes were nothing but outer leaves. Inside was a flimsy little bit of leaves-plus-prickly-fluff. What the- ??!! I thought there was supposed to be something inside the silly thing. This is what I get for waiting forty-plus years to denude an artichoke of its leaves, I thought, looking at the bit of nothing in my hand. It's a judgment on me. A punishment. Now I shall never know the joy of peeling and cooking my own fresh artichoke.

Sadly, I laid my knife down on the cutting board and wept for a while. The girls sympathetically passed me a tea towel on which to dry my eyes.

There is the bottom part of the artichoke, however -- is that all there is to it? -- and our artichokes must have been sub-standard because the bottoms were about as big around as quarters. Seriously. So I am completely kerflummoxed re: artichokes. How big are artichokes supposed to be in order to get an artichoke bottom that is big enough to balance the remainder of the salad on? Does it have to be as big as my head? A basketball? The moon, for heaven's sake?

The Salade Messidor was simple to prepare, artichokes notwithstanding. It also called for celery, caulifower soaked in a bit of white vinegar, some crisp-tender green beans and some peeled, seeded tomatoes. We had a smashing success with everything else, especially with skinning the tomatoes by dunking them in boiling water and then popping them into cold water.

Once the veggies were prepared, they simply had to be stirred together with some homemade mayonnaise and served, alas for the artichoke bottoms that never were!

We found that the salad needed salt a-plenty. Once seasoned, it was flavorful in an okay kind of way, but if Le Cordon Bleu thinks it has anything over my own friend-Julie's-mother-in-law-Connie's Summer Potato Salad, they've got another pensée coming, is all I've got to say.

The girls and I served the Salade Messidor with tilapia filets baked in herb butter and the Pommes Pont Neuf from the first week's lesson on page 253 of Le Cordon Bleu at Home. Pommes Pont Neuf are nothing more than homemade french fries, but with a snazzy name that translates as "New Bridge Potatoes," you feel like you're getting a little something extra, which may cause you to use an extra amount of enthusiam when coating each hand-cut piece with Heinz tomato ketchup from the huge plastic bottle someone plunked down on the dinner table. Bon appétit, mes chéries!

I love your write-up!! I'm with you on the artichokes...is that all there is after taking away the leaves?! I'm glad you tried a different mayo recipe and found one you liked. We're not big mayo eaters so I feel as if I've just checked this item off the list and will move on. Your descriptions are so vivid, and I thoroughly enjoyed your post, as usual! Bonne travail!

Hillarious! Shelley, I could just see you and the girls taking turns at the whisk! Loved your artichoke descriptions, I felt so frusterated this week, that I too was on the verge of tears! LOL. Mmm, Tilapia, and fries sound like a great addition to the salad. Darn it. Now I want to join Tuesdays with Dorie....

I did, of course, laugh my way through this entire post as I can so visualize each and every step of this, including the girls handing you a tea towel.

I will post some of my observations, etc. under P & Q at the Whisk site a little later.

Great post...that's why we love having you whisking with us...IT IS ALWAYS AN ADVENTURE!
~Kayte
www.grandmaskitchentable.typepad.com 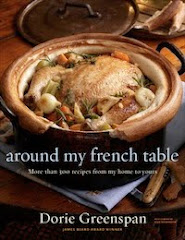